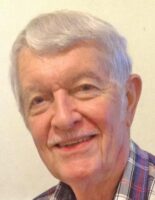 Don Noel is retired from a prize-winning career in television and newspaper journalism that earned him a place in Who’s Who in America. He and his late wife, Elizabeth Brad Noel, lived for a half century in an African-American and Jamaican neighborhood in Hartford, CT, and were deeply involved as volunteers addressing urban issues for four decades; he is former chair of the ACLU of Connecticut. They moved to the Seabury retirement community in nearby Bloomfield in 2016, still near their daughter, Emily, her husband, Tim, and their grandson, “TJ,” now a senior at Yale. Brad Noel died of complications of Alzheimer’s in January 2019. Her obituary can be read ==>here.

Don told the story of their building and managing a Jamaican vacation rental home in his Near A Far Sea. His first attempt at a novel, Love’s Hurricanes, has been honed in workshops and mentoring as he took a Master of Fine Arts degree from Fairfield University — but is still looking for a publisher.

He has published more than 50 short stories, all of which can be read at this website. For an overview of those published in book-length anthologies, go ==>here

For details on his Marquis Who’s Who Lifetime Achievement Award, go ==>here

For details on his Marquis Who’s Who Top Executives Award, go ==>here

For details on his Marquis Who’s Who Humanitarian Award, go ==>here

This website was built on a custom WordPress theme for Don by Jeanne Leblanc.