Published by Montana Mouthful in October 2020

Aunt Vicky’s door was locked. When he called half an hour ago, she’d volunteered to have it ajar for him. Tom wasn’t really worried: There didn’t seem to be a breeze, but it might have blown shut.

Leaving it open for him, rather than coming down 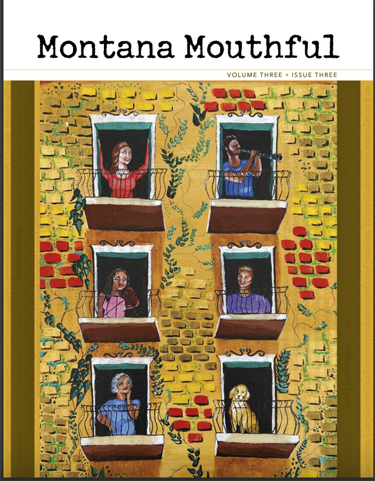 when he rang the doorbell, was new anyway — although not entirely unexpected. Last week she’d let him in, then on the way back to her third-floor apartment had to pause on every landing to catch her breath. Better for 90-year-old vanity to labor up alone, he supposed, and be breathing serenely when her favorite nephew arrived.

Or she might have been distracted by something, and forgotten. Never mind; wouldn’t be her first memory lapse. He pushed the no-longer-black button of the old-fashioned round brass doorbell. It looked as old as the house, which Uncle Steffen, a carpenter, had built as a wedding present for his bride.

The two of them raised him from maybe two years of age; Tom had no memory of either mother or father. Her husband was long gone, but she was an amazingly sturdy, disciplined survivor: Victoria Carlsen, retired schoolteacher, world traveler, foster mother.

He both loved and admired her. With a mop of snow-white curly hair that she insisted on trimming herself, she’d never let herself put on a spare ounce. She didn’t have to be up there on the third floor, but Uncle Steffen had built a separate doorway and stairwell to that level, which let her rent the rest of the house to one of the few intact families left in a deteriorating neighborhood.

She was still steady enough on her feet to be an avid gardener, puttering at flower beds around the house and managing a few tomatoes and other veggies in a patch in the back yard; she sometimes offered him tomatoes or string beans to take home to Betsy. His first instinct was to insist that she keep them for herself, but it pleased her to think that even at her age she had something to offer.

The doorbell hadn’t brought her; he had his cell phone dial her. He didn’t start counting until maybe ten rings; after counting off another dozen he gave up. Not yet really worried, he went around to the back yard to see if she’d decided to weed the garden while she waited for him.

She surely knew better than to go for a stroll. It wasn’t the same neighborhood it had been for most of her life. The shortest route to the park now went through some blocks he himself would hesitate to walk through alone after dark.

She ought to know better than to go wandering, anyway. But maybe not: She’d been slipping recently. Not quite like Alzheimer’s, he’d told Betsy after last week’s visit; just not as sharp. Forgetting that she’d already told him about the firemen’s visit, for instance, and telling him all over again with new embellishments.

The firemen had been making a routine inspection of old three-story houses, checking on heating vents and sprinklers, which was reassuring. They’d been wearing masks and rubber gloves, of course, but she hadn’t remembered why. The coronavirus, he’d reminded her, and there was just a bit too long a pause before she said “Oh, yes.”

“Did she have a cough?” Betsy’d asked. Maybe a little, but hardly worth mentioning, he’d said. He tried now to remember what it had been like. Kind of a dry cough.

He hadn’t seen any sign of the Tucker family, but he went around to the front door to ring. There used to be a way to get from their second floor to her third-floor stairwell. And they must have seen or heard her the last few days. But no one was home.

Back to her stoop, he set down the shopping bag of snacks he’d been carrying around, crackers and a good cheese and a small bottle of wine. She wouldn’t accept fattening chocolates or cookies, but what she called a “European aperitif” was a weakness she indulged. The bag set securely against the handrail, he tried to phone her again.

Maybe she’d just forgotten that he was coming, despite their brief phone conversation less than an hour ago. He called Betsy. “Sweetie, could you look up locksmiths in the Yellow Pages, and see if there’s one nearby here?”

“Did she sound okay when you phoned this morning?” she asked. “I don’t think you ought to go up there alone. Call the police.”

“All right. But there’s no point their smashing the door down. Look in the phone book and find me a locksmith.”

Turned out there was one only a few blocks away. “Call me back when you’ve got him arranged,” Betsy said.

The locksmith said he’d come right away, and he called her back.

“Are you wearing your mask? You don’t sound muffled.”

“She may have the virus thing, you know. You said shortness of breath, and cough. Once the door’s open, don’t just go charging up there. Call the police, please.”

The locksmith, a grey-haired black man who also wore a mask and gloves, said it wouldn’t take long – “That looks like the original, and they weren’t very sophisticated back then” – so Tom called the police. Two cops arrived, also masked and gloved, just as the man got the lock picked open. Tom opened the door.

There was Aunt Vicky, a crumpled heap at the foot of the stairs. His eyes began to well up.

One of the cops brushed by him and felt for a pulse. “She’s alive,” he said. “Best call an ambulance.”

She opened her eyes and looked up. “Tommy!” she said. “I knew you’d come.”

The hell with the distance stuff: He knelt down to take her in his arms, tucking her head over his shoulder so she wouldn’t see him cry.