Published in Lourdes University’s The Tau in January 2018

A lacy handkerchief stood perkily in the driveway at number 245, caught momentarily in a shaft of dawn sunlight on the passenger side of a sporty red convertible.  Relatively new neighbor, 245:  Bruce something, a coach at the university.  White man.  A bachelor, Charles thought he’d heard; maybe Sally told him.

He might have broken stride, gone up the drive, put the 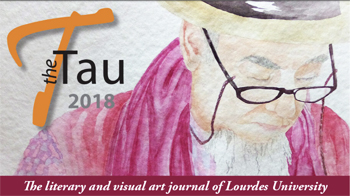 handkerchief on the windshield where it wouldn’t be missed.  He was already past it, though, and did not turn back.  Out for exercise, he avoided distractions: twice around the long block, briskly enough to get heart and lungs pumping.  He might wish good morning to any neighbor out this early, but not stop to chat.  If there were trash on the sidewalk, he didn’t even on garbage days stoop to put it into a waiting barrel.  To start that would turn his constitutional into a civic exercise.

A tall, upright man, he walked purposefully, although the staff he brought to ward off ill-trained dogs made him seem older.  There were of course lines in his craggy, coffee-colored face, but he’d cropped his Afro when the first gray appeared, so his hair hardly showed his age.  He still had four more years teaching Shakespeare before retirement.

Sally, on the other hand, was sometimes mistaken for his daughter.  Ten years his junior, she looked even younger, as pretty as a celebrity beauty on the cover of Ebony.  Despite bearing him two children, now in college, her body was still firm, well-sculpted.  She did martial-arts workouts most afternoons.  He walked seven mornings a week.  Up without an alarm – even Thursdays, after getting home late from his Wednesday night class.  She’d hardly roused when he slipped into bed last night.

His philosopher colleague Hiroshi might have made the early walk occasion for meditation.  Charles wasn’t into Zen, though, and the uneven sidewalk demanded attention.  He might let his mind wander to incipient lectures or exams, but mostly made a point of observing.

The block faced Everett Park, lined with eighty-year-old oaks, birches and pines.  There was morning birdsong, woodpecker-drumming.  He bought an Audubon recording and learned to identify chickadees, titmice, jays, robins by ear.  On their after-breakfast Saturday walks, he and Sally brought a bird book and binoculars.

The houses on this side were 1920s-big, sturdy but occasionally needing fresh paint or cosmetic carpentry.  He would mention such shortcomings at breakfast; Sally, as neighborhood block-watch captain, would prod city inspectors.  On the back half of the block, where they lived, there were houses on both sides of the street, of more recent vintage but still needing attention from time to time.  She was vigilant.

There was of course turnover.  He’d mention to Sally when a for-sale sign appeared, when the “Sold!” stickers were plastered on, and when there were signs of new owners moving in.  She would organize neighborhood welcomes, and always brought newcomers casseroles.

The handkerchief was gone on his second time around.  There were lights now in the first-floor rear, presumably the kitchen.  Perhaps Coach Bruce had stepped out to survey the morning and seen it.  Or the newspaper deliverer picked it up.  Charles gave it no further thought.

As it chanced, he encountered his neighbor that noon in the faculty dining room.  Charles and Hiroshi had taken their trays to a table when he came by.  Hiroshi knew him.

“Come join us.  Do you know Charles Spencer?  English lit.”

“Barely.  I think we’re neighbors, though.”  He lifted a finger from his grip on the tray, a gesture of handshake.  “Bruce Saylor.  Football.  Nice to see you again.”

“Thanks.  I’m lunching at my desk.  Backlog of paperwork.  Another time.”

“Right.”  Saylor shouldered through the door with his tray.

“Something of a lady’s man, I’m told,” Hiroshi confided.  “But well-read.  Schopenhauer.  You’d enjoy talking with him.”

A pity, Charles thought.  He might have asked Saylor if he was the one who retrieved the handkerchief.

No, just as well.  He imagined an awkward conversation:   “Noticed a fancy handkerchief in your drive this morning.”

“You must have had company last night.”

Did Saylor decide against joining them to avoid that conversation?  Everyone on the block knew of Charles’ morning constitutionals.  He pushed all that aside and made small talk with Hiroshi for the rest of lunch.  He was not Othello.  Would not let himself obsess about the handkerchief.

While Sally was in the kitchen that evening, he checked her dresser drawer.  There it was, surely the style he’d seen on the pavement.  His birthday present to her several years ago.  She dabbed on perfume with it as an invitation to love-making.  He sniffed.  Freshly laundered.

The rest was what any Shakespearean scholar would call denouement.

“How about we head to the railroad bridge?” he asked at breakfast Saturday morning.  It carried an all-but-abandoned freight line over the river.  Halfway across, it spanned a turbulent stretch, almost a whirlpool when the water was high, absolutely unswimmable.  The water was high; he’d checked it out Friday.  “Might see some ducks,” he added.

He waited until they were halfway across.  “Aren’t those eiders?”

“Over by the shore.”  Binoculars up, he leaned against the flimsy rail; she came to the rail beside him, peering through hers.

He’d expected to tip her over easily.  She fought back.

“Charles, what the hell?”  She dropped the glasses and reached for him.

He hadn’t considered her judo conditioning:  In a moment he was the one off his feet.

“You bastard!” she grunted as she tipped him over the broken rail.

He’d wondered if she might scream on the way down.  He clamped his lips; he would not.  He had a few seconds to wonder if she’d overreacted, pushed back too hard, or had seized a welcome opportunity.

He must have been right about the handkerchief.