Published in Meat for Tea: The Valley Review in November 2016

The agents at the Direction – the Direction générale de la sécurité extérieure — were certain the killer was an Arab, probably from Algerie; they’d given him the sobriquet Mahomet. A latter-day Jackal. Three ministres of the cabinet killed by rifle fire outside their homes – all, it appeared, shot from a block or two away by a sniper of uncommon prowess. 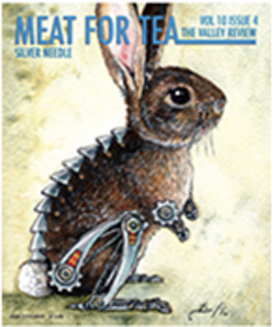 Jules had undertaken to hunt down and kill the assassin two months ago, expecting to have it done by now. A terroriste reube would be no match for a veteran in this game, and the récompense would be substantial.

Now it had become, unexpectedly, a duel.

The Direction had traced Mahomet to this village on the shoulder of the Pyrenees, where one could follow the swift, shallow river upstream — through the kind of mountain fastness into which Carmen and her gypsy smugglers lured poor Don José — and be in Spain in an hour. A swarthy Mahomet elsewhere might stand out gros comme une maison – like a sore thumb, the Americans say it – but so many Basques and Moors have over generations migrated to this part of France that he would probably blend in.

Still, the man must take target practice. The flics in Paris were insistent: A sniper of Mahomet’s accuracy would surely practice daily. Écoute bien, they told Jules. Listen.

But he heard not a single shot reverberating through the maples that bordered the river, or in the tattered fields of cornstalks that rustled in the autumn winds. He ambled through every tiny ruelle, took meals at every bistro, chatting with everyone, presenting himself as a peintre taking photographs for an oil or watercolor to be undertaken later, yet found anyone who remembered an olive-skinned man behaving furtively.

Then – temporarily, he was determined — their roles were reversed: Browsing among the legumes in the marché, Jules narrowly escaped the sniper’s bullet. Had he not at that moment bent over to inhale the aroma of a bunch of basil, it might have been over. When he heard the shot, he instinctively fell to the cobblestones and rolled under the farmer’s bench. And was sure he heard maniacal laughter from some rooftop in the next block.

He left town immediately, and spent two weeks preparing a disguise in which resolutely to resume his mission.

So Jules was now a charpentier itinérante, offering himself to villagers for odd-job carpentry repairs — so he would not stand out, to the piercing eyes of Mahomet, as a stranger. He had grown a beard, dyed grise. He was in fact an accomplished handyman, and was kept busy. He traveled in a cart drawn by an aging mule, his best weapons along with his tool kit under a burlap in the cart. He again took a room in the village’s only inn, primitif but adequate, and was not recognized.

He always found a way to ask, as he went about whatever household task he undertook, if the homeowner had noticed any etrangère saturnine, perhaps speaking French with a North African accent. And asked if anyone had heard a cackling, high-pitched laugh.

For weeks, he had no success.

Then an extraordinarily handsome, dusky young woman — perhaps a Basque or even a Roma, a latter-day gypsy Carmen – sought him out to rebuild her kitchen cabinets in a small farmhouse that must have been a century old.

It would be three days’ work, he estimated.

It immediately became apparent that she would be with him at every moment, admiring his handiwork, chatting incessantly. At noon the first day, she offered him dejeuner.

“Despite your gray hair, monsieur le charpentier, you have the body of a young man.”

“Please, mademoiselle, feel free to call me Jules. Yes, you might say that my hair turned this color as the result of a fright.”

“Oooh, formidable! Tell me more! And please call me Michelle.”

“No, it is too grisly a story for such pretty ears, and I must go back to work.”

The second day she offered him lunch again, and a glass of Bordeaux at the end of the day, which gave him an opportunity to bring up the question of gunshots.

“Mais oui, Monsieur Jules, I have heard eclats in the mountains just beyond the village. No, I could not say they were pistolets or the backfire of camions. You have some interest in these things?”

“Let us say mere curiosité. Is there a time of day when you hear these sounds?”

“At dawn, almost every day. Would you like to hear them? Perhaps you should put your cart and mule in the stable behind the house, and spend the night here.”

It was the sort of invitation the flics in Paris would have forbidden, had he asked. But his patient efforts had surely earned him some indulgence, and she was an extraordinarily attractive peasant. She made him a simple but delicious soufflé for dinner. They had more of the Bordeaux, whose subtle complexité grew on him with each glass. They retired together to her upstairs room, whose double bed proved both comfortable and large enough for rather acrobatic and entirely satisfactory ébats amoureux. Rejuvenated, he fell into a deep slumber.

He awoke well before dawn with a gathering premonition that all was not as it seemed, that ce matin he would hear no gunshots. Michelle, if that was her name, still slept soundly. He eased out of bed and tiptoed downstairs. His forehead was damp with transpiration as another certainty grew on him: He would not find his weapons.

The mule snickered as he eased into the stable. But another sound reached him, from the second floor of the little house: maniacal laughter. He stepped quickly to the back of the cart, and threw back the burlap cover.

It was as he feared: The cart was empty.

He had met his match.