Published by Door Is A Jar Literary Magazine, September 2, 2022

A thick, blinding snow flurry begins, a mini-blizzard, freak of early fall, a pre-Halloween enchantment. Because he eschews the intrusions of television and radio and so hears no weather forecasts, it is unexpected. He has been wandering in the 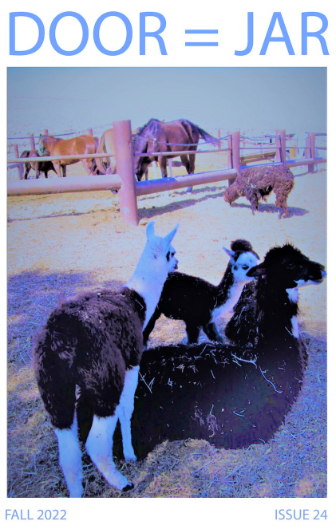 forest, looking for any edible fruits of the season past, perhaps wild black walnuts or chestnuts or beechnuts. The startling snow thickens underfoot and obscures everything.

It is not a forest primeval. The pilgrims who pioneered New England may have built their log cabins from the original oaks and maple, sycamores and hemlocks, and their grandchildren harvested the second growth for fuel in the days before the hydrocarbon economy. He has himself harvested third- or fourth-growth trees in his quixotic atavism to heat his cabin with fireplaces and pot-bellied stoves.

The result of these centuries’ reaping is a woodland with few distinguishing marks. The few native nut-bearers that were spared in each round must now compete in a thicket of undistinguished boles clad in thin, uniform bark, trees that in a dense snowfall all look alike.

He has lived out here three years, has traipsed through and labored in every square yard of the forest’s leafy acres, and yet in the brief bluster of this unlikely snowfall he is disoriented. The fat flakes have fallen heavily enough to obliterate his footprints almost as quickly as he created them.

He pauses, makes himself identify the northeast from which the wind has blown all morning.  He challenges his mind to visualize the weak fall sunlight that had filtered in from the east before this white tempest sprang up, to see in his mind’s eye the turns he has made since setting out. He has in the pocket of his Levis a cellphone whose electronic toys he understands to include a compass and maps and probably radio beacons, but he chooses not to use any of that modern frippery.

And he does not need it. In another moment he knows where he is, and strikes out for home with complete assurance. In fifteen minutes he can make out, through still-blanketing snow, a boxy shadow that is the looming adumbration of home.

It is, he thinks as he brushes white fluff from his shoulders and hat, almost exactly like the unseasonal snowfall two years ago when she knocked at his cabin door, lost and cold.

The snow on the ground that morning had been just thick enough that, as he opened the door, he was struck by a welter of back-and-forth footprints behind her—as uncertain as fingers exploring a new keyboard—that suggested her hesitation to approach a stranger’s rudimentary dwelling so deep in the woods.

He’d drawn a chair beside the stove for her, stuffed slabs of wood into it until it roared with warmth. He re-heated coffee atop it and warmed a slab of cornbread.

She let long blonde hair down from a parka hood, then—apparently reassured he was not a forest troll—unzipped the parka to a clinging cashmere sweater. Her too-thin sneakers grew damp as clumps of snow melted; he had her prop them against the legs of the stove to dry, and brought her a pair of his too-big fleece slippers.

They exchanged names; she apologized for intruding. He told her that he welcomed diversion from what had been a moment of writer’s block. Intrigued, and relaxed, she wanted to read; he demurred modestly, then let her coax him into reading aloud a few paragraphs from the screen of the laptop that besides the phone was his sole day-to-day concession to modernity.

His heart leapt at being coaxed by so lovely a visitor; she reinforced her applause with a radiant smile that illuminated the cabin.

It was a promising beginning. She explained that she taught first-graders in the public school not many miles from here. She wanted children of her own, she said, although was unattached and without immediate prospect. He assured her that he was not a hermit, and hoped fate would in time bring him a family life.

She thought she might enjoy living away from modern conveniences. He allowed he might modernize without destroying rustic pleasures, or might even find a new base closer to the hurly-burly. She said she knew a few birds on sight, like the crimson cardinal and the robin red-breast; he had her find them in one of the dozen birdbooks that graced his shelves. They found more common ground in agreement on the merit of feeling close to the natural world.

Your shoes look dry, he said; let’s go out, I’ll show you the barn, the chicken coop, the manger and cow.

Snow in October never lasts; they were hardly out the door when it stopped as abruptly and thoroughly as it had started. In bright sunshine, she realized she wasn’t lost after all.

His heart had sprung up when today’s sudden snow-squall reminded him of her visit. It sinks again in the knowledge that he has heard nothing from her since then, and at the certainty that today’s fleece-thick flurry will not bring her back.