When Jared Miller began talking with the winged and four-legged denizens of his backyard, his best friends took it as a transient derangement following Myrtle’s death.

Charlie Beck dropped in for a visit the morning after the memorial service, rang

the doorbell, and heard a shouted invitation to come around back. There Jed was, sitting in a deck chair with extra cushions as though planning a long stay. He put a finger to his lips, gestured Charlie to another deck chair, and gazed up into a nearby maple.

There was a largish black bird up there.

“Croaking,” Charlie told Jed’s gang that evening. They gathered most summer evenings at the little town’s ice cream parlor, which had a garden area perfect for conversation. Their colloquies usually lasted just a bit longer than two-scoop cones; they mostly managed to keep up with the melting while talking. “Maybe they were cawing,” Charlie added. “Anyhow, making a racket.”

“No, plain English, just raised his voice a little. Chin up, looking up.” Charlie tilted his own chin to illustrate. “Told the bird he and Myrtle had to take the bird feeders down this year because of the bears, so all they were offering this year was the birdbath.”

“That’s right,” Bonnie Howard said. “The state told everyone to take ‘em in, lest bears get tame and begin coming close to houses, and become a danger.”

“So then what happened?” Libbie persisted.

“The bird cawed some more, and then Jed told me what it said. Like he was translating.”

“So what was the translation?”

“He said the bird was a raven, had three fledglings not quite ready to fly, and was having a helluva time feeding them until they could get out and feed themselves.”

“Baloney!” said Tommy Peters. “You don’t need to speak Raven to figure that out. Any birder would guess that’s what was going on.”

Charlie ignored him. “Then he asked if ravens ate peanut butter. The bird croaked something that Jed seemed to understand, so he went to the kitchen, rolled a big spoonful of peanut butter into some cracker crumbs, tossed it into the yard, and told the Raven to be sure it all got eaten so as not to attract bears.”

“And it did?” Louise asked.

“Exactly. Croaked once, flew down to pick up the peanut-butter ball, flew up and disappeared into the tree. I stayed another ten minutes or so, and never heard or saw it again.”

Their cones finished, the gang parted for the evening, delegating Libbie to make the next visit.

A garbage can lid was on the ground when she arrived in late morning, Libbie reported next evening. “The inside of a metal lid facing up, with maybe an inch of water. It looked almost accidental. Jed shushed me, just like he did Charlie, and we sat and watched.”

“After about five minutes, two chipmunks scampered up and took long drinks of water from that garbage can lid. Then they looked at us and kind of chattered. ‘You’re welcome,’ Jed said to them. When they’d left, he told me they’d complained that he had a nice birdbath, but they couldn’t get up to it, and they were thirsty.”

“It has been a dry season,” Louise said, licking a drip of pistachio ice cream. “I don’t think it’s rained in weeks.”

“Exactly,” Libbie agreed. “So he put that garbage can lid out and filled it with water. Said he’ll get a proper birdbath on the ground as soon’s he can.”

“You don’t have to speak Chipmunk,” Tommy grumbled, “to guess that those little beasties get thirsty. I didn’t even know they had voices. Did you hear them say any words?”

Louise was the next delegate. She came back from a visit that included rabbits as a new topic. “They’d been eating his flowers as the buds fattened, just before they bloomed.”

“They do that to mine, too!” Libbie said.

“When I arrived, he was just spreading out what seemed like a carefully measured cup of rabbit pellets on the ground. Commercial stuff.”

“I wondered too. To find out how much that rabbit would eat, so he could put out just enough, with no leftovers to attract bears. He said the rabbit had no idea how much he and his babies would eat.”

“As though the rabbit could tell him,” Tommy snorted.

“No,” Louise said. “Jed told me some people raise rabbits to sell to specialty butcher shops. Supposed to taste like chicken. He’d made a deal with the rabbit: Stop eating flowers, and he’d put out a well-balanced meal every afternoon.”

“We sat quiet for maybe five minutes, and here came a big rabbit with four little ones. They fell to, and in no time the pellets were gone. Jed leaned forward and said out loud, ‘That was a cup. Was that about right for one meal?’”

“He was asking the rabbit?”

“Not that I could hear. Just seemed to twitch its nose. But Jed must have heard something, because he said, ‘All right, I’ll try a cup and a half tomorrow. And mind you leave my flowers alone!’ And off the rabbit hopped.”

Tommy was late the next evening. Most of them had finished the top scoop when he arrived with a triple-scoop cone of chocolate, vanilla and strawberry in one hand, and his handkerchief in the other, as though he’d been blowing his nose.

“Over?” Louise asked. “What does that mean?”

“Means that if he ever really talked with those critters, he doesn’t talk Bear.” 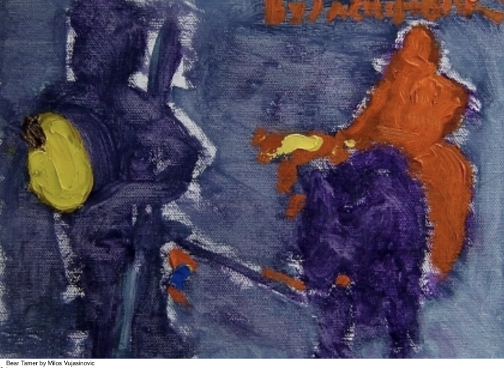