Published in riverbabble, a California online literary magazine, in February 2018

It is pouring; summer rain strikes the window pebble-hard. The sibilance of tires on slick surfaces carries up four stories, accompanied by bass-thumping car radios.

And sirens. A blatting fire engine nears, then fades, echoing down canyons. The righteous caterwaul of a 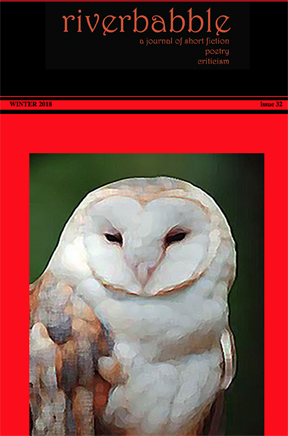 She gauges each siren. On the sofa, in a darkness redolent of whiskey and pizza, she stiffens as each nears. Her medical-technician training suggests a metaphor: She is as tense as rigor mortis.

The apartment smells of Sam, too: virile. And of blood. Her hands still seem sticky. She struggles to her feet, gropes for the bathroom light chain. She hardly recognizes herself in the discolored silver of the mirror. Haggard. Her grey shadow dances in the rust-stained sink as she washes her hands again.

There is Zoloft in the cupboard. She hesitates. Better not to be on meds when they come. Never mind. She rolls a pill into her shaking hand, runs water into a glass, downs it. Before turning the light off she rinses and dries her hands again.

Post-traumatic stress disorder? she thinks. Ironic, because it was Sam who first struggled with it, half a world away.

They met there, members of the Guard, both on first overseas deployments, after his Humvee hit an IED. Two of his buddies died before help arrived, Sam trying unsuccessfully to staunch their blood, his vest spattered like a paint gun. The corpsmen, when they came, told him some of it was his own.

She was on duty at the hospital. The blast had deafened him; she had to shout. “Take off your shirt and undershirt! I’m going to wash those wounds!”

Handsome, earnest Sam. “You’re pretty!” he shouted back. “Don’t I know you from somewhere?”

“I know.” It was stitched over his breast pocket. “I can read.”

How could he have guessed? But she ignored it. Medical techs weren’t supposed to fraternize with patients. His wounds needed little more than a dressing, and he bore her ministrations without wincing. “On your way, soldier! Check back tomorrow so someone can be sure it’s all healing okay. Get some sleep!”

He didn’t go back to barracks; he waited for her to get off shift. “Hartford, right?” he said.

She relented. It turned out they’d gone to rival high schools.

“You were a cheerleader, right?”

“I knew I recognized you. I was high scorer the night Central beat your Weaver for the championship.”

She had to admit remembering that game, even remembering him. They talked over coffee in loud voices that made others in the canteen look up, not knowing about the IED. She decided not to worry if she was overheard fraternizing.

Given a few days off so his hearing might improve before being sent out again, he kept coming to the hospital, waiting for her. Intimacy is urgent in a war zone. They found spaces where they could immerse themselves urgently in each others’ hard soldiers’ bodies.

She reached the end of her tour. He had longer, but as his hearing recovered, the sound of a backfiring Humvee, or even a door slamming, was enough to trigger crippling memories of that bloody day. PTSD. The acronym made it sound too easy. The unceasing reverberations of a cataclysmic trauma. Within a few weeks after her departure the docs sent him home for treatment.

Treatment, hell. He was mustered out so the damned Army wouldn’t have to spend any more taxpayer money helping him overcome the thing with loud noises.

They’d been writing, phoning. She found him as soon as he got back. They moved into this apartment, husband and wife in all but formality. “Marry me, sweetheart,” he’d urged.

“When we’re ready to start a family. When we’ve gotten you through this.” Pulling strings with a nurse friend at the VA, she got him into a treatment group.

That didn’t help perceptibly. It got worse. Old buildings resonate: radiators bang, windows slam. “What was that?” became a mantra. A man down the hall hammered a fist on his girlfriend’s locked door. “What was that?” Their bedroom adjoined the shaft of a rickety elevator whose old-fashioned folding brass doors clanged open and shut. “What was that?”

“Nothing dear,” she said again and again. “Try to relax.” But each sudden sound was amplified in his mind.

He drank, trying to stifle the sounds and dull the pain. She drank with him at first, to share the torment. Then tried to stop him: Hid the liquor, hid the money. He always found them. She worked at a nearby clinic; by the time she got home he was usually far gone.

This rainswept night is the Fourth. Kids have lit distant firecrackers for days. There were more – still remote, unthreatening — as afternoon waned into evening. They were half-watching television, her head on his shoulder.

Then came a huge barrage. Very near, under the window or in the elevator shaft, a long string of shattering percussions. He leaped up screaming.

“It’s all right, Sam, just firecrackers.” She tried to calm him. “The Fourth, you know? Try to relax, Sam.”

His voice went from a shriek to a groan. He staggered to the kitchen, picked up a knife. It happened so quickly she can hardly recall.

He kept coming, moaning. She backed up, stumbled, got her balance but was backed into a corner. She propelled herself into him, reaching for the knife. “Sam! Sam!” There was no recognition in his eyes. He was somewhere else, in another time. She felt him turn the knife toward her. With the strength of desperation, she twisted it away, and knew instantly, as he lurched forward, what she had done.

His body sagged, his grip loosened. She drew him down to her on the couch, thinking to staunch his wound. She felt for the knife, buried in his chest; tore her slip into rags and pulled it out, trying to stop the bleeding, knowing it was too late.

She eased his body down, and went to the telephone, feeling the keys in the dark. 9-1-1. “Officer, I think I’ve killed my husband.”

She gave the address. On the fourth floor. Open the doors, the voice said. She staggered down, avoiding the noisy elevator, propped the front door open and dragged back, leaving the apartment door open too, then came back to the sofa.

Now she lifts Sam’s head and shoulders so she can cradle him again, running her fingers through his hair, tears raining into his lifeless face.

And waits for the sirens to come for her.

One thought on “Sirens”