I wrote most of what finally became “Arson” in one night almost three years ago. I can’t remember what prompted it; probably a news account of violence against 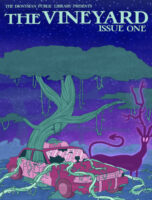 a girl friend. It’s wholly made-up fiction, but my daughter correctly observes that the poodle sounds like mine.

I set it aside, thinking it needed a more decisive ending. I find, scattered over time in my computer, four versions of this story, each with a different name, all strikingly similar. I finally decided that an inconclusive ending was okay, and began sending it out.  The Vineyard, a new magazine of an old literary site, liked it, and it’s out now, in print soon here==> , and online (scroll to page 14) here==>

My short story Miss Sam is a nostalgia trip: The setting is unmistakably Calabash Bay, Jamaica, where Brad and I had

our Villa Hikaru built 55 years ago. (It’s still there, handsomely improved by new owners and still for rent by vacationers. See recent pictures at villahikaru-dot-com; read my book, Near A Far Sea, elsewhere at this website.) I even borrowed some names from the neighbors, although Samantha and her three-generational family are entirely fictional, as is the story.
But I owe an apology to the Jamaican zoning authorities and power company: No one would build a power line along a beach, if nothing else for fear of hurricanes. That proposed line is purely an invention; I needed something for Tommy to sneer at.
The story is now published by Meat for Tea, The Valley Review, but isn’t at their website — only in a for-sale book. But you can read it ==>>right here

birds, I’ve had a parade at the suet cakes just outside my window: bluejays, cardinals, woodpeckers, nutcrackers, juncoes and several kinds of sparrows. I occasionally imagine a greeting through the closed window: Good morning, Mrs. Cardinal.

Which led me to imagine someone really trying to talk with such visitors, which led to a whimsical bit of flash fiction that appealed to Open: A Journal of Arts & Letters. You can read it in less than five minutes ==>>here

A cowboy’s lariat is a tool of both sport and hard work – braids of stiff hemp, back in the day when I used one, but nowadays more likely of nylon or polyester. Throwing it may look easy in a rodeo, but it’s an acquired skill.

Describing that skill in words proved a different kind of exercise, but I liked the outcome and tried it out on the literary circuit.  The editors of Moria Literary Magazine (Woodbury University, Los Angeles) say they had more than 350 submissions for their new edition; mine was one of 52 they picked.
It’s a five-minute read ==>>here

When I worked at The Hartford Times, five or six decades ago, we were a long city block from the Travelers Tower. Most decent-weather mornings, some of its occupants spilled onto the sidewalk f 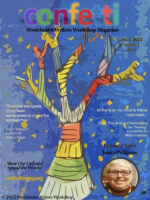 or a breath of fresh air – or nicotine – with paper cups of coffee.

I suspect times and customs have changed, but I enjoyed remembering those gatherings, and imagining a little fillip of surprise. The editors of the Westchester Writers Workshop enjoyed it, too, and published it in their semi-annual magazine, “Confetti”.
You can enjoy it too, by clicking ➙here

I’ve tried writing for magazines that only consider 50-word or 100-word pieces, and have even had a few published, but it’s not a genre I’m fond of. Even 500 words

usually seems too constrained, but occasionally I find a topic that doesn’t need more than that — and then Panoply is the one I try first. When I sent them a piece on taking my bird feeders down, they accepted it in a short three weeks, telling me (what a writer loves to hear) “The writing quality itself is the winner in this piece.”
You can read it in Panoply, ==>>here

Seems every time I think I’ve finally exhausted the story potential of my three years at a college-cum-ranch in the California desert, another memory pops up.

The power company lineman who served our 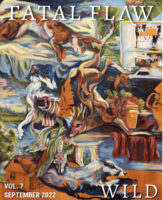 district was more cautious than anyone I’ve known, before or since: He worked entirely alone in places where a slip or fall would probably be fatal.

The story I concocted about him wasn’t accepted by the first few magazines I sent it to; perhaps too slow-moving, or too grim. Then I heard of Fatal Flaw Literary Magazine, which invited work “that considers the world through a cracked lens”…”that finds poignancy in unexpected places.”

They liked my The Lineman; you can read it online ==>>here
(Just click on the title, just below the cover)
Or ==>>right here

blizzard-like, then melted away when the sun came out. Might make the setting, I thought, for a romance lasting little longer.
Some magazines care more about language than character, setting or plot: “work that takes the earthly and makes it ethereal,” one says; others seek “flights of fancy”…”poignant memories”…”explorations of language”. Not my usual style, but fun to try, and this story became a vehicle for florid writing.
I first titled it “Spring Snow”; but as rejection slips came in, I changed the season to appeal to magazines publishing later in the year. It’s out now in a magazine with the quirky title “Door = Jar”. It’s print-only, available at Amazon et al, but you can read my short-short “Autumn Snow” ==>>here.

A favorite photo is one that Brad took during our vacation

visit to the Galapagos islands: I’m posed on a beach with a sea lion seeming to be just over my shoulder.

That photo popped up one day and inspired the fictive imagination. What if being amidst such tame animal life persuaded a lifelong meat-eater to turn vegan? And as I began writing, I decided to make my protagonist a virile athlete, and named him for my multi-sport college suitemate, Flash Gourdine.

The result was “A Flash in the Pan,” a 900-word short-short story. It’s published this month by WayWords Literary Journal, one of those I respect because it’s edited by professionals.

It’s available as an e-book or paperback at Amazon, or you can read it ==>>here

I’m not quite sure what prompted me to begin the short story that ended up being called “Orchestral Passions”. I began it in June

of 2021, mid-pandemic; I found myself listening to a recording of a favorite opera, Salomé, and wistfully imagined enjoying a concert performance in Hartford’s premier showplace, The Bushnell.
That musing morphed into an older woman’s musings on love and lust at such a performance. I imagined her looking forward to really getting to know the granddaughters whose company the pandemic had denied her.
I sent it off to several magazines, but was especially hopeful about The American Writer, which had published two of my earlier stories and whose theme for the next issue was “The End or The Beginning.”
Sure enough, they took it. This is one of the few literary magazines nowadays that are not online, but available only in print (at Amazon or Barnes&Noble); but you can read my contribution ==>right here